In May CAPRI BY NIGHT is curated by Daniel Burkhardt and Matthias Müller, both well known respectively for their video installations and experimental films and also for their teaching activities at the Academy of Media Arts Cologne.

From “shrinking cities” in Eastern Germany to the housing estates on the outskirts of Cologne: the video works selected by Daniel Burkhardt and Matthias Müller from the Academy of Media Arts Cologne for the May edition of “Capri by Night” all circle around the urban space. In seven selected works, it is being observed by anonymous camera eyes, inhabited by countless birds, architecturally analysed – and being demolished several times. Instead of only serving as a backdrop for filmic narration, it is gradually developing into an autonomous realm of perception and reflection.

Denis Beaubois In the Event of Amnesia the City will Recall, 1997, 10 min 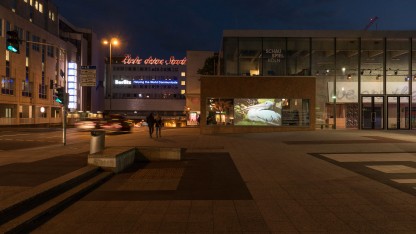 videoscreening for the public space, every day from dusk till 5 a.m. at Schauspiel Köln, Offenbachplatz, with a monthly changing program curated by: